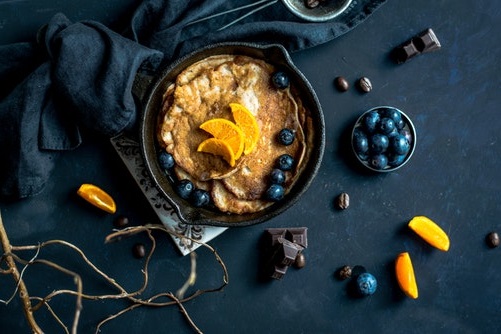 She couldn’t remember if it was the unwavering pangs of hunger that woke her up, or the fact that she had slept late. Something definitely startled her out of sleep.

She sat up clutching the bed sheets willing herself back to the present. She was thirsty.

In her still hazy state, she descended down the flight of stairs that separated her bedroom from the living room. She made for the kitchen and opened the door.

The glimmering pieces of steel that made up the knife stand called out to her almost telepathically. She reached for the one with jagged edges and made for the fridge. She seemed oblivious to the cold wind that blew past her. She carried out a whole loaf of bread with peanut butter. She was as hungry as she had just been thirsty.

Standing by the kitchen sink, she made a sandwich, munching it with a fervour she could not comprehend, her eye still glazed. She finished her midnight snack and headed back to the bedroom.
The living room clock read 1.oo am. It was a pitch black night.

Something hindered her path in the hallway leading to the bedroom, but it was too dark to see so she kept poking at the shadows. After a while it stopped, but nothing prepared her for the crash that followed, knocking her off her feet. She laid there for a while, exhausted, then picked herself up. She must have knocked over the big shelf that manned the doorway.

Entering the bedroom, she quickly got into bed and laid, sprawled out like a kite about to take flight. Suddenly she felt a cold sensation from her nightie. Someone must have left a bucket of water by the passage door.
“That will have to wait till tomorrow”, she thought. Soon she was fast asleep like not even the discomfort she felt could keep her awake.

Buzzzzzzz! The alarm went off at  7am. She woke up and cursed out aloud. She didn’t remember setting the alarm. A blinding bright light danced through the window as she tried to adjust her vision. She suddenly realized that she had blood on her nightie, and the room was not hers. A cold chill descended on her, she must have been sleep walking again!