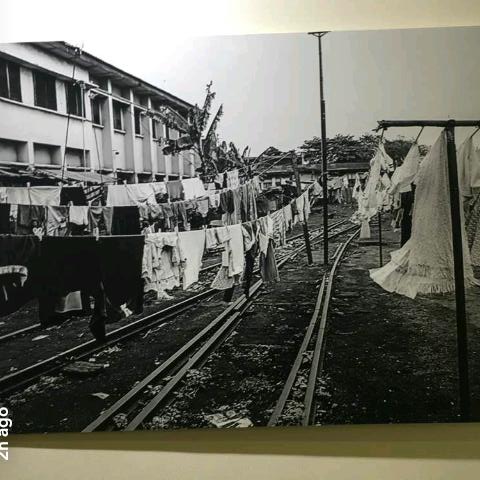 I sighed as i dried my husband’s clothes, it seems the whole residents of the estate washed today. The drying ropes were burdened with clothes. I look around the estate like i was seeing it for the first time. The old railways dragged across the estate, giving the environment a metallic look of abandonment yet the trees hovered around the place like they were protecting something. The bars between the tracks were buried deep in the black sand. Everything in the estate looked black and white like an old photo. Even the sky was tinted black and white. The tall palm trees looked embarrassed, like mighty men that have lost their glory.

I stare at the huge white buildings most of us call home and i remembered how my husband promised we were going to move to a better neighborhood, seven years ago...-Omolola
—————————————————————————-
People see clothes in the midst of tall buildings,signifying earthly pictures of a middle size economy.I see dilapidation in the streets of Change,rail way tracks significantly a spot for spreading sacks socks In the sun.
When I told Ambode,he vibrated jerkily at the wonders of commoners who supported the act of injustice. Injustice to the Hero who built the railway but in the grave watching how it has been reduced to a laundry junkyard.
See those rail way lines screaming for help because a square peg has been put in a round hole. Can you look once again and elevate this crowd madness?
Mama bom boy saw nothing wrong with it. She even asked Bom Boy to splash some shades of pepper water from the window.The world will be a better place if neighboring cities took a second look at the insanity displayed.Gracing the moments of Bash’s “there is a lunatic in every town”-Rachel Charles
—————————————————————————-
The picture frame hanging on her wall in black and white, was not just a picture.

Every time she looked at it, she quickly traveled back in time; one faithful day when her life would have changed forever.

Bisi was only 6 years old so she wasn’t allowed to execute laundry like her older sisters did every Saturday. Her home was one of the block of flats that stood shabbily by a rail track in Yaba, Lagos.

As always, this faithful Saturday. Bisi sat on one of the laundry buckets, as she listened to her older sisters take turns talking and demonstrating how the boys wooed them.

Folake hadn’t said her 10th word when they heard the sound of an oncoming train. The girls got up and fled the tracks but Folake’s dress was stuck. The train came quick and shredded the most part of her sister’s clothing.

From then on, the cloth lines were taken down and their backyard never remained the same.

She’s grateful to have this priceless photograph that her dad had taken.-Hybrid
—————————————————————————-
“Deji! Please ensure that sitting room is set in time” mama’s voice came from the kitchen accompanied by the taunting aromas from the kitchen, the type one only perceives when the moon is blue.
“Yes ma!” Deji answered with tiredness in his voice.
The whole house woke submerged in chores preparing a welcome party for Jide, who has been in London for 27yrs. It took, at least, 10yrs of mama’s pestering for Jide to finally decide to come home.
By 6:45pm all was set, food (kpomo, amala, ewedu, gbegiri etc) laid beautifully in wait on the table, King Sunny Ade’s Fuji music filled the excited air of the house. Mama and Papa waited at home anxiously while Deji and his two sisters went to pick their big brother from the airport.
The feasting, laughing, dancing, questioning and catching up went on and on till it was a few minutes to midnight, then everyone retired to his bedroom after the night prayer had been said.
Once in his room, Jide pulled a plastic chair and sat by the window looking at the once busy, now abandoned, rail track and all his childhood memories came flooding.
After a long trance, he shook his head at the state of the railway ” ahhh Nigeria! Are we going forward or backwards?” He thought half aloud as he walked away from the window into his bed then turned out the lights using his bedside switch. Tee2emm
—————————————————————————-
When i was i little, i always looked forward to visiting my grand parents, cause their house was located beside a railway track and i loved to watch the train pass as i joined all the children on the block to wave at strangers.
You can always tell the rich apart the poor. The happy as well as sad faces, sometimes if i am not quick to leave the house, i can only catch a glimpse its back as it left puffs of smoke and kept whispering toot! toot! That same sound can also be annoying especially if you’re still trying to get some sleep at 4am in the morning. I hated chores and grandpa Jack is fond of making everyone do some chores in the morning. So the sound of the train by that time signals long hours of morning devotion followed by chores.
I loved it best when the train passed by in the afternoon and evening so i can see it with my friends and create fun make believe stories about the passengers.
But all this was a long time ago. The trail has now gone cold, buried under debris and dirt. It’s only a piece of old rusty metal running in parallel lines. I sighed as i went back into the house after drying grandma Grace’s clothes on the line along the old tracks.-Vera.
—————————————————————————-
I recall reading that there are very many ways that people could travel around the world. In an episode, airplanes made fame as they were they only media that drew you closer to God. In another, canoes made history as they were the only way you could dare to stay above or walk on water. And in yet another season, vehicles climbed the charts: Hummers, Land Cruisers, Luxurious buses and many SUVs made commuters smile. The relationship between people and these means of mobility took occasional breaks, but they always stayed in touch like rail to track.

Damian understood all these concepts. He knew enough already. But as far as he was concerned this picture spoke differently. He had shared copies among friends and waited desperately for the best caption to appear. He had settled for “a train with naked people” before he read “after the death of trains!‘-Leon