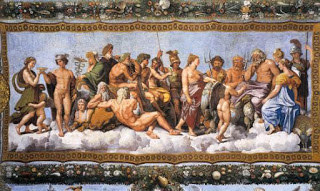 Days of the gods
Poet!c Oracle

Set me loose, from this flesh of man!
The ways of men are inferior!
Off their diverse plagues I live superior!
Home! Home! Eternal father i call!
NorthPriest Judha
Not we all live to exhaust our Celestial privileges.
Strange relation Between now and never,old and fore circumstances.
Only the chosen did the forbidden in present times,even then.
Because we are gods and we’re just more than men.

Oluwaseun Okunlola
A time may yet come when fate gives the word.
There may be a place somewhere for what will be.
I take up the reins. I choose to guide the rudder.
I’ve stalled enough waiting on the day of the gods.
Bangwan Usman
Tales of you my ears swallowed, though not from you.
Actions of you I see,though i Neva felt.
Sparer of the rode I heard you not.
Your days I heard has no identity with ours.
Leonell Echa
Hmmm! I heard they couldn’t even win
I heard they couldn’t abort to begin
Cleaning out their whole creation was a sine;( they could have disagreed)
Now the widow is bearing another twin. Hmmm!
Oluwadamilola Hybrid
Prayers fell on deaf ears
Turbulence dwelt in every tribe
Madness, sheer madness
The days of the wooden goddess.
Rudolph Ruddapoet
The skin has become a map to sketch the path of its voodoo,
Exploding the twin nectar of sweat from twisted doctors.
Aloof, as gaping words mutate into deeds; suicide becomes genocide for homes inside.
We live in the days cloned from God, days made for these gods.
Sam Ojiyi
We used to walk the gardens together
Holding conversations lighter than a feather
His laughter was as the deep rumble of thunder
This was way before men became fallen gods

Vera Bonny
Every time they loved, disaster was sure to brew, their punishment the most ruthless ever,
Zeus untop of the affairs, riding fast or slow, with a thunderous roar,
Hera by his side, gently fueling his wrath, by the slender strokes of her sleek fingers,
Ah! My favourite is the most wise and beautiful Athena, her breath is made of gold, you’ll know if she’s been unfaithful.
Anre John
For blood you thirst like suckling  fiends.
Baiting with dreams, visions and omens.
Portions and spells bewitching like sirens’ songs.
Till reasoning rebelled against the stench of your false truths.
Prudence Obadan-Enujiofor