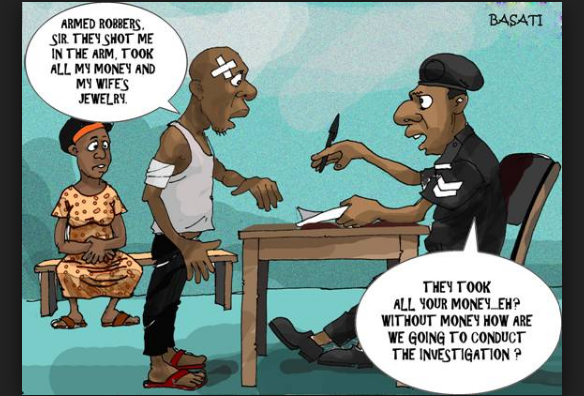 (In a police station, a policeman and Mrs Dauda discuss bail conditions)

CONSTABLE 1; Madam your husband is a mad man, he claims he stole the sack of cassava because he prayed and when he opened his eyes the sack dropped from heaven, hahaha, your husband dey craze (he continues to write in a dusty record book)

MRS DAUDA; i dey beg you sir, my husband na good man, na condition make lion chop carrots, we no touch the cassava. Infact…
(another constable joins them and cuts her short)

CONSTABLE 2; madam your bail money na 5k and waste time money na 5k too. ( Mrs Dauda gasps loudly) wetin? You think say we dey waste our time here abi? Your husband will sleep here forever if you don’t bring the money by 5pm sharp!
( Mrs Dauda leaves the police station with her hands on her head)

CONSTABLE 1; i know say you love your husband, you go sign plenty papers before i release him. When you go home advise your husband, crime no good o, the next time we catch am na life imprisonment o.

(Oga Police was transferred to Mbiktu town for official duties, and in that town the recent kidnaps caused a curfew of 7pm to be reinstated there. It was past 7 this day when baba was passing Oga Police checkpoint, his other comrades were taking an early nap before he’d wake them later, this conversation ensued)

Oga Police: Hey! Who dey there? (The figure kept coming closer and he recognized an elderly dirty looking man) Baba, where you dey from come? You no know say curfew dey abi you wan provoke officer of the law?

Baba: Welldone, officer, errrrm My Pikin, I no see okada from my farm as I comot na him make I late, I trek reach here, abeg no vex, make I just enter house, e no far from una checkpoint

(Oga Police, now feeling himself and wishing his friends would see him now in “power”, he then decided to try something since no one was watching)

Oga Police: Baba, u go just do 10 frog jump pass here make we just end the matter since you no hold yam sef for officer of the law.

Baba: My pikin (he stammers), I I I I, eeeeh e no go be disgrace if I do frog jump for your front? I no even sabi wetin that thing be sef. Abeg, no vex make I enter house, I don tire aswear

(Oga Police, now amused by that statement, felt irritated and began to shout)

Oga Police: You wan come insult me for here abi? (Drops torchlight) shei you dey feel say na because you be old man I no fit shoot you? You don insult me finish

Baba: (in a soft voice) I say no vex my pikin, okay if you fit show me wetin be frog jump, I go do am. Abeg my pikin.

(Oga Police now smiles, takes his AK47 that was tied up with masking tape that looked frustrated and kept it on the sand bags that was used to halt moving vehicles and bent on his knees, squatting he began to frog jump for the old man to see, and he found himself not stopping, the old man now bent to his ears).

Baba: Shei na me you want make I do frog jump, after I beg you tire. You never see anything, if you hear the first cock crow na him the frog jump go tire you.

Scene 1
(Tom runs into his brother’s father-in-law in the street).
Tom: Good evening sir, ehen, I was thinking of going to the house to see you.

Father-in-law: Evening Datok, I hope all is well.

Tom: Yes sir. Its just that I misplaced the bank draft for my school fees and the bank is asking me to get a police statement. I went to the police station in Gada Biyu, imagine o, the DPO, was asking me for #3,000.

Father-in-law: But how much dey on top the bank draft?

Father-in-law: Haba him no try. Wetin go happen be say, come see me for Katako Station around 9 o’clock, before I commot go patrol

Tom: Thank you very much sir.

Scene 2
(The following morning at the Katako Police Station:
Tom enters the station and approaches the police man behind the counter).

Father-in-law: Thank God you even come before I commot, I don talk to our Oga, him say him go help you (because of me) for #2000. This man go carry you go him place. No vex I dey hurry, I don late. Till I see you in the evening for house.

(Father-in-law leaves hurriedly, Tom still standing, planted by the turn of events, so that he didn’t hear a thing the constable was saying to him). Tee2emm

(Between 2 officers and 1 civil servant on the road)

Man: Oga na nothing ooo. Na just my motor bike and the rice when i buy.

Man: Oga, abeg na which rice una want share like that? Na only 4 cups i buy oo and…

Officer: Na 4 cups you dey call only? (sergeant appears with plate). Oya measure 3 cups comot since na only him one, one cup for fit do am.

Man: Officer i beg. No be only me get…

(Man rides off and after a mile, he runs into another check point).

Officer: Oya park well! Park well na! You know the drill. Oya submit. I nor fit talk too much today. Submit and move on.

Man:Oga abeg i nor carry anything. Na only rice i carry, and for the first checkpoint wey i pass, them don collect 3cups out of the 4 cups wey i buy. Abeg nothing remain. I take God name beg you.

Officer: (calls out to Musa) Musa! oya come collect rice go cook. Use that onions when we collect from that woman, that maggi wey that girl give you, and the firewood wey we sieze from that driver. Water dey under Commander bed. Use am! Oya young man, move before i ask you to go cook the rice! – Leon

(An onlooker is seen on the ATM queue just by the gate of the bank while a small crowd gather round the other end of the bank premises. A gun is seen hanging from the shoulders of a man in a police uniform).

Officer; who the hell is he to speak to me in that manner (he talks at the top of his voice)

Man 1; so because you wear uniform, make I just quiet dey look you like film abi? (He fires back at the police officer)

Man 2; (visibly shaken by the fracas. He stutters) Oooogaagaga, thithis thing nehever reareach like this now. We fit settle the matter amicably.

Banker; (he is seen coming out of the banking hall. He is wearing a black suit. He obviously is a superior authority in the bank) what’s the problem here please?

Uniform man; oga na this stupid boy o. Because he dey drive company bus, he no sabi how to talk to person. I just tell am make he park well na hin he start to insult me o.

Banker; please these arguments and gatherings are not good for the bank this Monday morning. (He turns to man 1) can you please drive out if you are finished here?

Banker; officer, please give him his keys.

(The onlooker blurts out a remark that seemed to offend the officer. The officer points his gun in an attempt to fire at her and he has the bottom of his gun facing her)
Onlooker; Oga you go need go learn how to shoot before you go fit shoot anybody for hia you hear? ( Every other person present busted out laughing).
-Hybrid