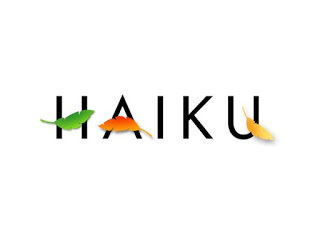 Likes it in threes,words from a poets tree.
Gave her a quatrain with no last line,not authentic she refused.
Then I gave her a Haiku, immediately on her face,
She wore a new designer call SMILE.-Bangwan
And so it was, I asked my love; what is the meaning of a Haiku?
“It means no matter what you do I won’t let you in heaven”.
In poetic frivolity, i retorted: “be careful or I’ll bite you”.
We ended up in a playful syllabic bunch of fives and sevens.-Dr Sam
Haiku
17 syllable
A math riddle
Like sewing with a needle-Hybrid
Teasing and Taunting
It laid its might across their art
Some chick-walked some just walked
Indeed Haiku left an impression on each of them- Prudence
Had learnt from the great masters.
Revolving in a 5-7-5 lines of communication
My diary became my sanctuary.
Guess am the last left goddess of Haiku…-Hypermind
A puzzle of 5-7-5 was a curtain of draping fog;
Clouding the heart that won’t let go.
Drops of rain soon drowned;
The spirit of a caged poet-Joy
17 syllabic miracles in a week long capsule
Ghosts were created while the old ones earned a seat at the counsel of elders
Some hearts giggled from their gringos
In the dawn of a new voyage haiku still glimmers in the distant. – Tee2emm
Haiku hasted into the crowd
Murdered everybody even those who ploughed.
Ghosts, spirits left to roam
Only portraits survived, shaded in monochrome- Leon

I knelt on the trace you anointed with grace
Making me say much-less in a confessional of V-VII vest.
I am now a god that has eaten so much of odd
numbers written in the hieroglyphs of a Japanese manuscript – Rudolph
Magic of perfection!
Power that binds me so!
Before your gaze, let me be!
OracLe of God!- OracLe
What ya find in the ground when ya looking beyond the sand?
Its just weight on the head to him who wears the crown.
Y’all be careful, ain’t no treasure whatever kind in nothing.
Don’t mistake the scaffolding for the building.  Northpriest