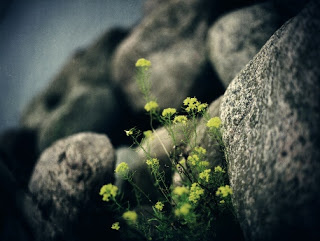 Flower in a rock
Jimeta Umar

They left one stone unturned, it was at the corner
They wanted it to be simple so they cast them in stone
They never imagined plants growing from concrete, but again who would have thought of a rolling Stone?
For a flower in a rock, I will pay through my nose.


From underneath the stairs the little seeds learned to wave;
Yellow teenage curly little flowers yawning from the bricks.
For when nobody cares
The nest is built from tiny little sticks

She was a damsel, an ice-less queen with a skin of the day
her soft mouth sat on her face, with a glorious splendor like a star.
Her heart was made of a stone no words could ever break
or so she said the day we discovered how she was deflowered.

Damned from the dawn of birthed lies.
On a earth scorched and left to rot.
Demonised by lore and saintly sermons.
She’s trapped like a flower in a rock.

Humans we are and we all can’t be stars.
Not all of our yesterdays left good memories, but we live despite the scars.
The storm came so strong and blew us from our home.
Not falling on the soil didn’t stop us from being flowers in a stone.

Amidst rubbish and heaps of trash
Demons howl, dogs bite and gathering of clouds
There she sits.
Concrete Angel