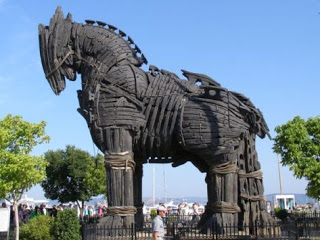 Achilles had his tendon, but that his weakness
Hercules had his strength, but Zeus didn’t need a goddess
Samson fell for Delilah, and his gift she came to destroy
All they had to do was burn the horse. but the gods are to blame for the fall of Troy

His Hoofs, ten times proof.
That Boots are just shoes.
Her Hair makes you drool.
A trojan horse is feminine too.
Leonell Echa

Neighing behind his back was his trojan horse
The slower it went, the longer the fuss
But when the con men showed up at the top of his desk
His Control was the Alternate to Delete the task
Rudolph Ruddapoet

Faintly sung, the music she heard was wrong.
Numbers that spun into alphabets to think a moan.
Fires sparkled bright, leaves living in green home
All in her memoir was faintly his Trojan horse.
Vera Bonny

The trophy was a trojan horse,
He crept to bed, frolicked with it
When he awoke his nightmare real
A scourge of war his poor eyes met.
Jennifer Dafwat

The blue flame smiled with pride and charm
With a crafty tongue and comely breeze she blew out his red fires
Where are the days of wild hunt and untamed moonlight? He laments
His treasury now houses relics of a lost identity
Desmond Adeoye-Adetoba

Okay, i know what a horse is
But i know nothing of trojans
And don’t ask me to force it
‘Cos i plan to simply ignore it.
Anre John