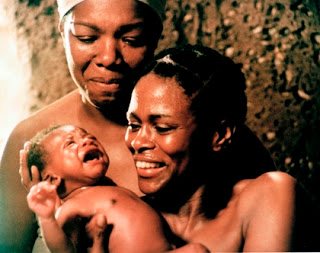 Kunta is a Black name


Kunta is the name of the black young soul
Whisked across the Atlantic in cargo ships of crammed spaces
Chains gagging  and DNA looping to keep in root-check
Even when the lashing whip viciously christens Toby.

As a black name, Kunta feels darker with a “Kinte” as the last name.
Even sounds black wearing shackles colored darker than a black slave.
Borrowed seeking woods for beating drums in Mandinka on a dark day.
They say Toby is a black name cos it was given to a black slave-I
say Kunta is a dark name and the “Kinte” makes it sound great.


Kunta is a black name
Lost in the memory of coves and shades
Even walked torrid waves
To the birthing of free will on a pale morning.


Whips and strokes on the canvas of his back
Beast of burden became He clothed in black
Yet deep in the heart of white landlords and white rain
Toby lacked color but KUNTA remained a BLACK NAME.