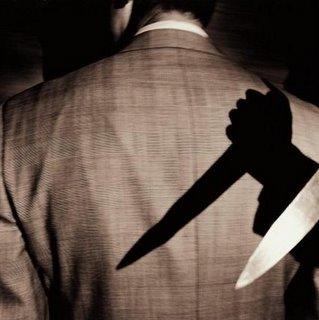 IF YOU
LIKE…!!!
The society is scarcely
made up of friendly people especially when it has to do with material benefits.
Friends become rigid, fathers wish they are surrogates; valets say less but
wish they could have more than a mite. The conscience is mislaid. Distrust of
the early Roman Empire is replayed. Responses are repartee. The application of
the truth ointment is tiring. The only quest is for whom to acquire the raft.
Accordingly,
Brutus and Caesar, Jesus and Judas, they all started out as best friends, but
history shows us that even the most powerful men can be betrayed by those they
trust the most because duplicity is human nature.
But
the truth in friendship can be exemplified-two very hungry dogs named
‘Friendship’ and ‘Don’t-give-two-shakes-of-a-lamb’s-tale’ stick together while
looking for bones (probably because they feel a bone might spark a brawl). Unfortunately,
they stumble across one bone as they both sniff towards a direction. The dog
named Friendship quickly does a math to sum the fact that despite his very
hungry state, he can let Don’t-give-two-shakes-of-a-lamb’s-tale have the bone
to avoid a scuffle. But meanwhile, Don’t-give-two-shakes…is already busy with
the bone not minding whether Friendship can use a lick. So friendship walks
away, not sad but happy that Don’t-give-two-shakes…’s got a bone to eat; ‘one
surviving and another dying is better than both dying’, he says, as he walks
away in search of a bone that both might still share.
Surprises
are the worst shockers because we end up feeling we’ve been let down. ‘How
could he have done this to me?’ you say to yourself, but it’s not a bother to
Friendship because he already expects it from Don’t-give-two-shakes…. Ludacris
the rap artist once said in his track titled
Tell it like it is; ‘the first rule for
the accumulation of wealth is trusting nobody but your goddamn self’. John
Hagee, author of Jerusalem Countdown
once said: ‘just because you can’t
imagine a nightmare of mega proportions becoming reality, don’t be duped into
believing it can’t happen’. You shouldn’t turn your bathroom into a
scullery. The fact that washing is done in bathroom does not mean culinary
utensils should be washed in there.
Friendship
has graduated from merely being there when it’s wanted, always making
provisions where and when needed, being a shoulder to lean on, being the piece
of cloth that wipes tears off a face, to taking a bullet for its sake and
bearing the whole burden for NO REASON IN PARTICULAR because a REASON IN
PARTICULAR makes no sense at all to friendship. How long are we gonna keep
talking about THE UNCONDITIONAL?  Bother
to follow me please.
—To
be cont’d…
Prev postNext post
Click Next To Continue Reading This Post